Posted at 10:00h in Uncategorized by Riversymposium 0 Comments

Congratulations to the shortlisted applicants of the 2022 European Riverprize!

This year we had so many strong applications, all demonstrated the wonderful work in river management, conservation and development contributing to the resilience of Europe’s rivers, wetlands and surrounding communities. Find out more about our shortlisted applicants below.

The Tisza River Basin is the largest sub-basin of the Danube River Basin, being shared by Ukraine, Romania, Slovakia, Hungary and Serbia. It is an important European resource with various biodiversity and rich ecological assets. Unfortunately, due to river regulations, the length of the Tisza has been decreasing over the past hundred years, changing the conditions of wetlands and greatly affecting the floodplain and structure of the riverbed. Action is being taken, however, to reverse this damage. The Tisza Analysis Report in 2007 represented a milestone in the implementation of the 2004 Tisza Memorandum of Understanding (Tisza MoU). Since then, actions have been taken by Ukraine, Romania, Hungary, Slovakia and Serbia governments to recognise the Memorandum, reaffirming the importance of cooperations between countries concerned. The flagship JOINTISZA project was then implemented between 2016 and 2019, resulting in the updated Integrated Tisza River Basin Water Management Plan. The JOINTISZA 2.0 project, to be submitted this year, deals with the issues of water scarcity, groundwater issues and plastic pollution, demonstrating an ongoing commitment to preserving the important Tisza River Basin. 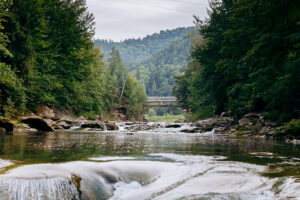 The Prut River is one of the largest rivers and one of the main tributaries of the Danube River. It is a transboundary river that is shared by Romania, Republic of Moldova and Ukraine, and has an essential contribution to water supply for the population and agricultural activities in the west of the Republic of Moldova. Prut River ecosystems also provide important ecological services such as the maintenance of rich biodiversity and the regulation of water cycles by wetland areas. Unfortunately, the pollution of litter within the Prut River from land-based and illegal dumping, as well as inadequate wastewater and manure treatment, have had many negative ecological, economic, recreational and aesthetic consequences on freshwater ecosystems. In response to this problem, the CRoCuS project has worked to develop a trash alert mobile application (developed by WiSDOM Association) which acts as an important instrument of communication between citizens and local public authorities regarding waste issues. Additional efforts such as workshops and clean up activities have been organised, incorporating the surrounding communities of the Prut River in achieving river resilience. 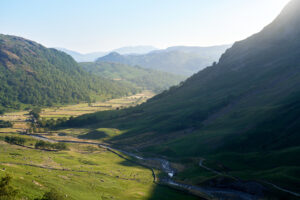 The Lake District National Park is a UNESCO world heritage site situated within the country of Cumbria. The rivers of the Lake District form an integral component of the outstanding universal value of the area, which has been shaped by upland farming and intensive dairy agriculture in the valley bottoms for many centuries. All the watercourses within Cumbria have at some point been modified or altered to create space for farming practices, reflected in the poor quality of many of these rivers. This mismanagement of the watercourses has exacerbated the effects of several severe flood events in recent years, with the area also suffering degradation of designated protected areas (SSSI and SAC) and a severe decline in biodiversity. The Cumbria River Restoration partnerships programme has delivered over 100 projects of various scales in the Lake District. Statistics summarising 31 of the largest restoration projects indicate that almost 100 km of river length have been improved and almost 150 ha of associated floodplain restored. As the programme has evolved, targeted interventions to rejuvenate former systems dynamics have been implemented, with additional work to re-naturalise many of the tributaries discharging into the main rivers. All this practical work has been accompanied by engagement, training, and educational initiatives ranging from community events, volunteer days, internal and external training, conference and workshop presentations. 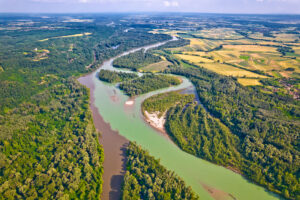 Covering a substantial section of the European Green Belt, the Mura, Drava and Danube Rivers (MDD) form a dynamic and interconnected lifeline in Central Europe. In 2021, the MDD area became the world’s first UNESCO 5-country Biosphere Reserve as a model region for connecting nature conservation and sustainable development. Conflicting land uses such as past and planned regulation of natural river courses, extraction of river sediments and planned hydropower dams are threatening the ecological integrity of this area, undermining the natural resilience against increasing floods and droughts and damaging economic assets such as rich ground and drinking water, flourishing forests, agriculture and fish populations. In response, the joint vision for the “Mura-Drava-Danube” area is to use the Transboundary Biosphere Reserve (TBR) concept to maintain a living river ecosystem for biodiversity and ecosystem services and to promote a nature-friendly economic development for local communities of this rural region. A joint effort of ministries, public authorities, protected area administrations, universities, local communes and NGOs are saving valuable sites, strengthening the TBR qualities and a harmonised sustainable regional development. 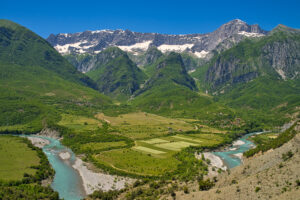 The Vjosa River is one of the last wild rivers in Europe, and the river and its tributaries flow freely from the mountains in Greece to the Adriatic coast in Albania. The Vjosa is a dynamic river that not only supports biodiversity, but supports residents of the valley which homes of 4.6% of Albania’s total population. For years, however, planned dam projects have threatened the entire river system. If constructed, they will destroy this natural environment, flooding some parts of the valley while leaving others dry. The campaign to save one of Europe’s last wild rivers – the Vjosa in Albania – has been running for ten years as part of the Save the “Blue Heart of Europe” project, with a clear vision: stop the planned hydropower plants and create Europe’s first Wild River National Park (WRNP). The campaign has achieved many milestones such as: stopping a dam project; having the Albanian government declare the Vjosa a nature park in response to an online petition; and in 2022 – with the support of Patagonia Inc. – the Albanian Ministry of Tourism and Environment signed a MoU declaring their intent to establish the Vjosa WRNP – a paramount stepping stone to achieving the goals of the EU Biodiversity Strategy. 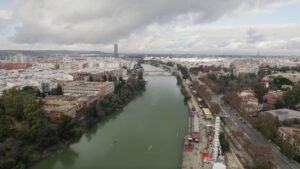 The Guadalquivir River runs between Sierra Morena and the Baetic System, flowing into the Atlantic Ocean through a low area covered with wide seasonal marshes, forested shrublands, dunes, salt ponds, aquiculture ponds, crops and human infrastructures. The Guadalquivir Estuary – which extends for more than 110 km – has suffered a profound historical transformation resulting in the modification of the former river structure and the drainage of extensive areas for agriculture and settlement. In 2009, the Centre for Strategic and International Studies (CSIS) made a report focused on waterbird communities in the Guadalquivir River. The Port Authority of Seville (APS) recognised the need to increase the knowledge on the Estuary dynamics, collaborating with different institutions to develop a comprehensive management of the Estuary. Following an integral and adaptive approach, the CSIS has developed a set of design and management actions to create suitable habitats for waterbirds and other species.